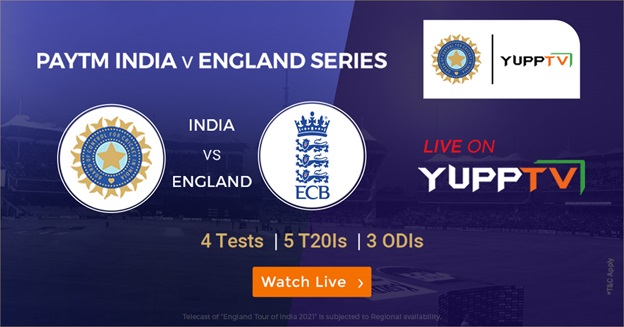 Paytm England vs India series is all set to commence from the 5th of February in the MA Chidambaram Stadium in Chennai. The series will kick off with 4 Test matches (one pink-ball match included) followed by 5 T20Is and 3 ODIs. The series is scheduled from February 5th to March 28th in three venues namely MA Chidambaram Stadium, Chennai, Sardar Patel Stadium, Ahmedabad, and Maharashtra Cricket Association Stadium, Pune.

Indian team captain Virat Kohli is all set to join the Indian team again after he took a leave from Australia after the first test match. Ishant Sharma and Hardik Pandya who missed the tests in Australia were also included in the Test squad and will be playing alongside Rohit Sharma, Ajinkya Rahane, Cheteshwar Pujara, Rishabh Pant, Shubman Gill, Jasprit Bumrah, Washington Sundar, and others.

Indian team triumphed against Australia in the 4-test series in their tour of Australia. Indian team won the final match that happened in The Gabba, which was known as the fortress of Australia as no international team had secured a victory in the stadium for over 3 decades.

More impressive is the news that the Indian team managed to win regardless of the absence of Virat Kohli under the leadership of Ajinkya Rahane. The team also lacked the skill of its main bowlers due to injuries but still secured a victory with the stepping up of young bowlers like Mohammad Siraj. Batsmen Cheteshwar Pujara, Rishabh Pant, Shubman Gill, and Mayank Agarwal also performed wonderfully and played a key role in India’s historic victory.

England team recently completed their tour of Sri Lanka and are ready to face India in the Paytm India vs England series. The English team is on a victory high as they clean swept the two-test series against Sri Lanka. England’s Captain Joe Root is in fantastic form. He had scored a double century in the first test and over 150 runs in the second and was named the player of the match in both matches.

The England team will be joined by Jofra Archer, Ben Stokes, and Ollie Pope who were rested for the Sri Lanka tour while Jonny Bairstow, Markwood, and Sam Curran will be rested for the tour of India. England’s team comprises Moeen Ali, Stuart Broad, Dom Bess, Rory Burns, Jos Buttler, Zak Crawley, Ben Foakes, Chris Woakes, among others.

The matches will be broadcast live all over the world on all the major networks. From Continental Europe, you can watch Paytm Series India vs England 2021 live streaming on YuppTV.